Honoring the Community Heroes of 2020

Communities are the glue that hold our cities, states and country together.

And heroes are the people who support, sustain and sometimes save those communities in times of trouble.

Let’s be honest, 2020 has been a time of trouble. It began with an impeachment, then accelerated downhill with the onset of the COVID-19 pandemic in March and the ensuing lockdown of American society, the death of George Floyd in police custody in May (and the protests and violence that followed) and, more recently, included unprecedented wildfires across Oregon and much of the west coast.

Through it all, it’s been some of the best people among us that have kept our communities safe, interesting and livable in these unprecedented times. Because of that, we are taking a moment to honor our best with its first-ever Community Heroes special section. Community Heroes, which is being distributed this week in more than 20 papers printed and distributed by Pamplin Media Group, honors some of the best, most productive, bravest and most giving citizens in the communities served by PMG papers.

In this special section, you’ll read about April Murchinson, who serves as Associate Pastor at Emmanuel Church in North Portland, as well as lead volunteer for the Portland Police Bureau’s Crisis Response Team. You’ll find out about the efforts of Gresham’s Frani Grover, who has tirelessly fed and aided unhoused people in East Multnomah County. Then there’s Sherwood’s Rich Stamps, a lieutenant for Tualatin Valley Fire & Rescue, who cut short a hunting trip with buddies to help fight fires in the Chehalem Mountain-Bald Peak area of Yamhill and Washington counties.

The stories — more than 20 of them — go on throughout the section, each one highlighting people from one of the many communities served by Pamplin Media Group newspapers. 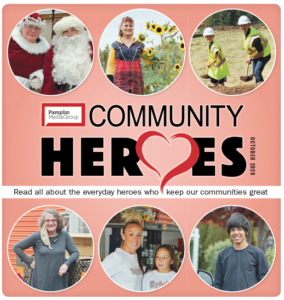 These sections aren’t possible without the generous support of our sponsors and advertisers. We offer special thanks to Pacific Office Automation who stepped up to be our Community Hero Sponsor for this year. As you read these stories, please consider supporting the businesses who have advertised in theis section. Without their support, we wouldn’t be able to acknowledge the accomplishments of our community heroes.

PROUD SPONSORS OF THE 2020 COMMUNITY HEROES