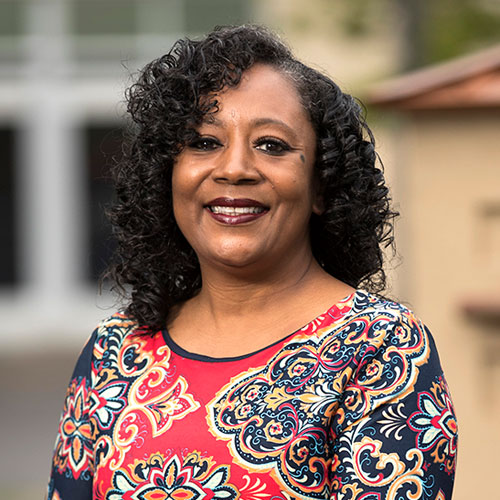 Why she is a hero: April helps Portlanders in crisis as an Associate Pastor at the Emmanuel Church and lead volunteer for the Portland Police Bureau's Crisis Response Team

CARING FOR PEOPLE IN CRISIS

Although April Murchinson now lives in Vancouver, she cares deeply about the emotional, physical and spiritual health of Portlanders. She works tirelessly to help as many of them experiencing trauma as possible.

“At the end of the day, I simply have a passion for serving and assisting people in crisis,” she said.

April has a full-time job as a Port of Portland contact administrator. But she is also a business owner and an Associate Pastor at the Emmanuel Church in North Portland, where she specializes in assisting families through the bereavement process when a loved one has died. Many times that means being with them even before the death, helping them deal with their grief, and helping to arrange the funeral services and burials.

“Many times, people are so distraught, they don’t know where to begin. In situations such as this families have trusted me to make decisions and arrangements on their behalf,” April said.

But in addition to that, serving alongside the Program Manager, April is also the team leader of the Portland Police Bureau’s Crisis Response Team (CRT), which is a group of screened and trained citizens who provide support to victims of traumatic events, their families and friends, and their larger communities following a crisis. Because of her compassionate nature, April was recruited to join the CRT shortly after it was founded in the 1994 response to increasing gang- and drug-related violence and other traumatic incidents. It now consists of dozens of people assigned to four specialized teams, and April leads the volunteer responses to almost every call.

“No call-out is ever the same. It may be categorized as a homicide, but with each crisis you encounter different personalities, different emotions, different cultures, different beliefs, and so on, so you can’t walk into a crisis assuming anything,” April said.

During the past 25 years, April has been called out hundreds of times to scenes of homicides, suicides, fatal crashes, serious assaults, accidental deaths, suicides, SIDS and hate crimes. She and the other team members respond as soon as possible, at all times of the day and night, spending countless hours supporting victims, their families

and their friends. The work can be tough and includes everything from holding hands to wiping tears, home and hospital visits, delivering death notifications, and attending funerals and graveside services. Her work even extends to helping families generate funds when there is no insurance and they are not eligible for crime victim assistance support.

April sees few differences between her work for the church and the CRT. In both roles the priority is the people and serving them.

“There’s a spiritual piece to all of this. Without judgement, you have been placed in a position to not only serve, but to offer hope in a time of crisis. A crisis can be anything from a divorce to the loss of a job to domestic violence to a suicide. And there are always many victims. Even the family of a crime suspect are victims that must be treated with compassion,” said April.

The COVID-19 pandemic is making the work even harder, however, by requiring extra precautions when responding to calls and limiting the people who can plan and attend funeral and cemetery arrangements.

“The stress is very high these days,” said April.

April was born and raised in Portland before moving to Vancouver to care for a relative with dementia. She worked for 10 years at the U.S. Bankruptcy Court before leaving to become an executive assistant to the late Bishop A.A. Wells, founder of what was first known as the Emmanuel Temple Church. It is now under the leadership of his son, Senior Pastor Dr. C.T. Wells, who changed the name to Emmanuel Church.

Despite her CRT leadership role, April is quick to credit others for its accomplishments, and is grateful to each family that allows the Crisis Response Team to step into the vulnerable places of their lives in order to provide assistance in times of crisis.

“It’s not about me. I’m standing on the shoulders of those before me, including those who started the program and all the other team members who have served on it,” April said.