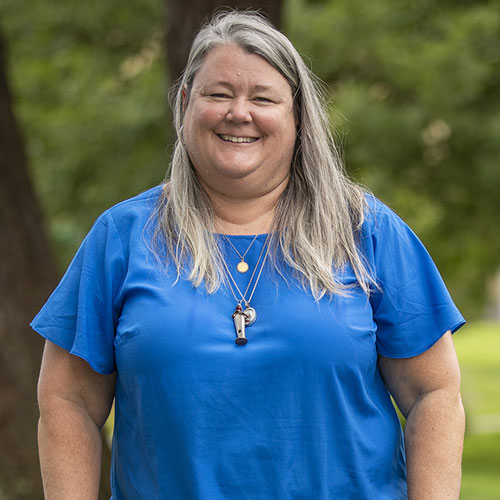 Why she is a hero: Carleson has spent her career working to create more opportunities for students in Hillsboro, both privately and professionally, through her work at the Hillsboro Schools Foundation.

As a kid, Aron Carleson remembers seeing her dad at special events, interviewing the Harlem Globetrotters or circus performers fresh off the trains they rode into town with their elephants.

A news reporter, Carleson’s dad was always making connections with people, and sometimes he brought her along.

Meanwhile, her mom was always involved in her school’s events or organizing neighborhood systems such as a babysitting cooperative, Carleson said.

She said that engaging with her community has always been a part of her and her family.

Carleson has spent decades dedicating herself to the Hillsboro community by working to improve public education, both in her private life and professional career as director of the Hillsboro Schools Foundation.

A resident of Hillsboro since 1994 with two adult children who graduated from the Hillsboro School District, her service to the community has extended outside of its schools.

After being appointed to a seat on the Hillsboro City Council in 2006, Carleson won an election for the seat later that year and then was re-elected in 2010. She also served as council president while on the council.

Carleson has also served on several committees and advisory groups at the city, school district and Hillsboro Chamber of Commerce.

At the Hillsboro Schools Foundation, Carleson has worked to secure funding and support from businesses, community organizations and individuals for STEM, career and afterschool programs, playgrounds and other opportunities for students.

She says her focus on schools comes from the belief that the health of a community relies on the quality of its schools.

“It’s all about creating more opportunities, and more diverse opportunities for students,” Carleson said. “To have a good community, you need to have good schools.”

She said her chief task has always been to show people that if they support students, it will ultimately benefit their business or organization because kids will grow up with more skills they can apply within the community.

But reaching people who are willing to donate to schools isn’t easy — the vast majority of Hillsboro residents don’t have kids in the school district and more than half of those kids’ families qualify for free and reduced lunch, she said.

But Carleson relies on building relationships in the community to gain support for the Hillsboro Schools Foundation, said Nathan Sosa, president of the foundation’s board.

“Aron’s outstanding characteristic is her ability to connect with people,” Sosa said, adding that Carleson’s ability extends across all backgrounds. “She’s able to find connections with people and then relate those connections to the work that the foundation is doing. It’s something that has impressed me from the moment I met her.”

What Sosa called an “encyclopedic memory,” helps Carlson keep track of people and what’s happening in the community, and then come up with partnerships that could benefit students, he said.

Carleson’s nimbleness in supporting schools, teachers and students during the pandemic was another substantial achievement, Sosa said.

He said that under Carleson’s leadership, the Hillsboro Schools Foundation reacted quickly, set up a pandemic relief fund and raised almost $150,000 quickly to help families access technology and the internet, virtual programming opportunities and basic necessities, including food.

She was particularly proud when, in the summer of 2019, someone from a local company she had previously connected with called to say the company was switching the brand of construction tools it used and wanted to donate $300,000 worth of tools to Hillsboro schools.

Asked what motivates her, Carleson said, “It fills my cup just knowing that something has made a difference.”