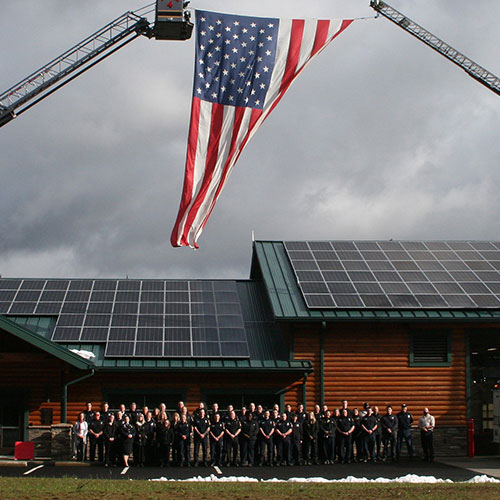 Why they're heroes: Members of the Banks Fire District stepped up through death, wild fires and the COVID-19 pandemic.

Not all heroes wear capes, but some — such as the Banks Fire District — wear turnouts.

It’s been a difficult year for the Banks Fire District. COVID-19 restrictions have complicated even the simplest of duties, the state saw extraordinary wildfire activity, and tragedy took from them one of their longstanding members this past January. But despite the difficulties of an unprecedented year, the department continues to provide the service so many in the area have come to appreciate.

Banks Fire District Chief Rodney Linz said he was particularly proud of his department staff for continuing to execute its duties and going the extra mile despite growing concerns around the pandemic — something he’s grown to expect from his staff.

“I think a lot of times people miss the pride and commitment people have in helping someone,” Linz said. “Our staff was here every day and were committed to providing that service and helping others. They were still putting in for the betterment of the community and I think (that) … a lot of people don’t realize that they make that choice to come help.”

And they do so as volunteers.

Ninety-six percent of the Banks Fire District staff are volunteers with outside work and often school obligations in addition to their work with the district. They work both 12- and 24-hour shifts consisting of duties that include but aren’t limited to service calls, maintaining and cleaning the facilities and various apparatus, studying for school and further education, and both physical and mental training therapy.

Sadly, the department’s mental health was put to the test earlier this year when veteran Banks firefighter Captain Mark Hornshuh tragically and unexpectedly died. Linz spoke to the tragedy and communicated just how hard Hornshuh’s death was on everyone who’d known him over the years.

“I would say that’s probably the most significant event this department has had to (deal with) in many, many years,” Linz said. “Mark was 30-plus years with us and was a pillar of the department. He was always here to support the department and was just a good person and a great resource. That was really hard for a lot of people who knew him on a personal level.”

The new Hornshuh Creek Fire Station #14, located near Buxton along Highway 26 across from Hornshuh Creek Road, was named in honor of Hornshuh’s parents, whose land was donated by the captain in 2018. The new station is frequently and conveniently used to service rural parts of the area and stage department efforts when servicing traffic accidents or forest fires west of Banks.

The new station, as well as existing department services, has seen its share of action this past year as calls have increased by 25%. Additionally, forest fires throughout the region have necessitated Banks Fire District volunteers span the state in an effort to help. Linz said his staff helped with the Powerline Fire at Hagg Lake last year, along with the Bootleg Fire in southern Oregon and conflagrations in Sisters and Bend this summer.

Linz said his department is happy to help when needed, but at the same time warned that they only do so when there’s no risk of compromising the service to Banks.

“Certainly, we participate and try to help as long as it doesn’t draw down our service here,” he said. “The city of Banks is and has to be our top priority.”

In the end, Linz is proud of his department and confident that, despite the various hardships it has faced over the past year, remains up to the challenge.

“Because we’re a 96 percent volunteer department, we’re often dealing with people that have their own private lives and complications, in addition to trying to provide our services,” Linz said.

“So trying to get all those pieces connected, along with doing so with all of the challenges we’ve all faced over the last year is a challenge. But we’ve got a very good core group of staff and I think we’re doing very well.”