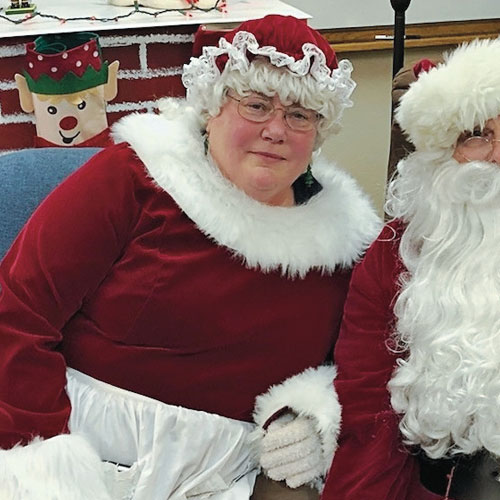 Why she is a Hero: Forest Grove's Laura Christy has volunteered countless hours to programs such as the Western Washington County Firefighter's Association’s Annual Crab & Steak Feed, the National Night Out, the Backpack & Snacks program, charitable activities with Stoneberg Alpacas, and the Tree Lighting in Cornelius, acting with her husband as Santa and Mrs. Claus.

CORNELIUS CHRISTY IS MAKING A DIFFERENCE

Laura Christy has lived in Cornelius for 35 years and worked for the City of Cornelius Public Safety department for 25.

Yet while admirable, it’s not her time spent living and working in the area, but rather what she’s done with it that makes her a “Community Hero.” During her time in Western Washington County, Christy has volunteered with local charitable programs like Western Washington County Firefighter’s Association’s Annual Crab & Steak Feed, the National Night Out, the Backpack & Snacks program, charitable activities with Stoneberg Alpacas, and the Tree Lighting in Cornelius, acting with her husband as Santa and Mrs. Claus.

She’s served food, shopped (for the Backpack & Snacks program), and amongst a bevy of other things, put smiles on countless kids’ faces in a way only Santa and Mrs. Claus can.

And why? Because she doesn’t know another way.

“The ability to give something to someone that makes their life better,” Christy said. “It just doesn’t get better than that.”

It’s been that way for most of Christy’s life. As a child, she said she was always encouraged and taught the importance of giving back. She worked on gift baskets with her parents as part of the local Moose Lodge, was part of the Girl Scouts, and said her mother did various other charitable things, for which she’d always help.

“It was definitely instilled in us,” she said. “We were always taught to give back.”

Throughout the years giving and the hours spent, Christy said a pivotal point for her was during her work as Mrs. Claus, both at the library and as part of the Christmas Tree Lighting. She said they got to take the kids shopping, give them “goody bags,” and then take polaroid pictures with kids — many of whom were part of the foster kids program and weren’t accustomed to getting much if anything for Christmas. That was “special” she said, and made her feel like what they were doing was making a difference.

“The appreciation was so apparent,” Christy said. “And seeing just how much those kids love to see Santa, it just means so much.”

Christy and her husband Wesley Proffitt also have a special needs child, Jolise, who’s Christy’s stepdaughter. As a result, both are very active with the Oregon Special Olympics and Unified programs, even participating in the annual Polar Plunge, a fundraiser that entails a winter dip in the Columbia River.

“I’m one of those crazies,” Christy said with a chuckle. “But helping those kids and letting them get to do the sports and things that they might not normally be able to do, is really inspiring to me.”

She doesn’t need much in the way of inspiration when it comes to donating her time. In fact, she has a more difficult time saying no.

“I find it very difficult to say no. On occasion, I’ll have to say, ‘Sorry, I just don’t have time for that,’ but it’s not often.”

Recent times have been difficult for Christy. The pandemic has made some of the things they do impossible and limited many of the usual tasks Jolise can do due to her developmental disability — which is hard on her stepmother.

“It’s really hard for her to understand why she can’t do things,” Christy said. “She’s a very routine-oriented girl, and it’s difficult for her and a lot of the kids in Unified Sports to grasp why they can’t do the things they enjoy.”

Ultimately, she and everyone hope for things to return to normal relatively soon. After-all, the holidays are approaching and with them comes the “season of giving,” something Christy says she simply can’t live without.

“It would be very, very sad,” she said in response to the idea of not being able to give in her usual manner. “It would leave a void in my heart not to be able to do that.”