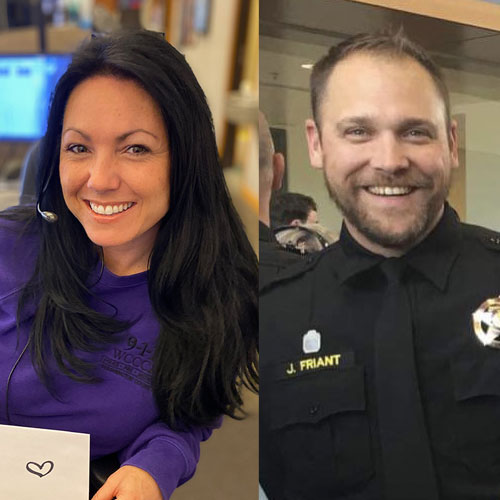 Why they're heroes: WCSO dispatcher Tiffany Myers and Deputy Joshua Friant worked together to rescue an 88-year-old woman from her burning house.

For most 911 dispatchers, closure is an extremely rare occurrence. When they receive a call, they stay on the line until help arrives, but usually, there is no resolution, said Washington County Sheriff’s Office dispatcher Tiffany Myers.

“You know, you go from call to call on any given night, and you might take a barking dog and the next minute a domestic and the next injury crash, and then someone having a seizure, and back to the barking dog,” she said. “And it’s just like one after the other. You don’t necessarily stop in between to focus on any particular one.”

But when an 88-year-old woman in Aloha called 911 early August, it was one of those rare occasions where Myers stayed until the very end.

“Very quickly into the call she said there’s a fire and she said that she wasn’t able to get out,” Myers said.

Myers quickly signaled a call for help over the radio. Washington County Sheriff’s Deputy Joshua Friant was the first to arrive at the scene. Friant, a former Marine and volunteer firefighter, didn’t hesitate to jump into action.

Based on the information Myers gave him, Friant was able to deduce the layout of the house and where the woman was located.

“I opened the door and called to her immediately,” he said. “There was so much smoke in there I couldn’t see anything. So I got down on my knees and crawled down and kept trying to talk to her. And then as I approached her, I found her feet,” he said.

Myers, meanwhile, was on the phone with the woman the whole time, telling her to yell out at Friant so he can find her.

“Probably what was so significant for me personally was hearing him through her phone,” she said.
As the smoke continued to fill the room, Friant said he initially had a difficult time trying to get the woman to leave with him. She was scared and wanted him to help her find her walker.

Friant was patient, but he persisted. He treated her as he would his own grandmother.

“I grabbed her wrist and I told her, ‘Ma’am, I’m gonna pull you out of here. And you’re probably not gonna like it, but we need to go right now,’” he said.

Friant eventually was able to get the woman outside her front door, where she was immediately met with medical attention from other first responders.

Myers was relieved to not only know the woman was saved, but to hear it happen in real time.
“A call like this one is really what helps with the calls that don’t have such an amazing ending,” she said. “This is the call that makes me come here every day and (gives me) the strength and ability to move on to the next call.”