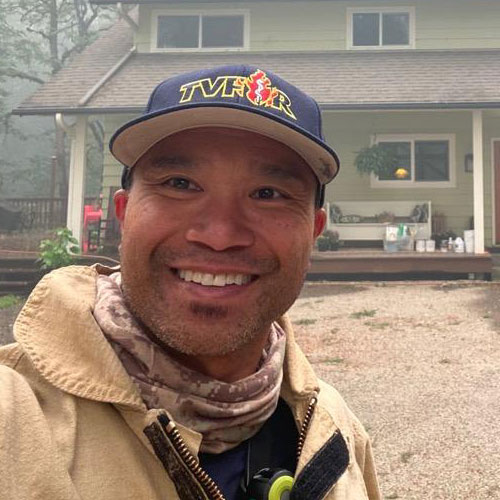 Why he is a community hero: Helped fight the Chehalem Mountain-Bald Peak fire along with three other wildfires.

Tualatin Valley Fire & Rescue Lt. Rich Stamps and three of his fellow firefighters were off-duty, elk hunting along the Oregon Coast on Sept. 8 when they heard they had shut down the area because of fire danger.

Not long after, they received pages that their services were needed to help battle a nasty wildfire that was developing in the Chehalem Mountain-Bald Peak area of Yamhill and Washington counties.

It didn’t take Stamps or fellow firefighters long to confirm that they would return to help battle the blaze.

“From the time we left, … it was about an hour drive, we all wound up on the same fire engine an hour later, fighting fires,” he said.

A firefighter assigned to Station No. 33 in Sherwood, Stamps is part of TVF&R’s specialized Wildland Firefighting Team. He fought the Chehalem Mountain-Bald Peak Fire and those on Petes Mountain in West Linn, Baker Road in Sherwood, and a major fire in the Colton area.

Of the four fires he helped attack and suppress, Stamps believes the Chehalem Mountain-Bald Peak fire proved the most difficult because of the winds.

And the smoke was particularly bad.

Still, even with the winds and smoke, Stamps said he never felt like he was at a point of being in significant danger, having been involved in numerous wildfire situations during his career, although there were a few times time that alarmed him.

“It was the second day when the fires climbed up in the trees. You got to worry about trees falling down and stuff like that,” he said. “It jumped several roads.”

In the end, The Chehalem Mountain-Bald Peak fire scorched an estimated 875 acres.

At one point during the fire, Stamps said he and his crew took out an air monitor that can measure carbon monoxide in parts per million, typically used to test the air in confined spaces.

While firefighters usually consider 35 parts per million as the time to put on a self-contained breathing apparatus, or SCBA, while fighting a fire from inside a structure, the outside air was averaging in the 40 parts per million level. Since those breathing devices contain only about one-half hour of air, everyone had to rely on the N95 masks.

He said the fires he fought were really “up close and personal,” pointing out that they were the worst fires to hit so close to populated areas, including firefighters’ homes, that he has ever experienced.

Cassandra Ulven, a public information officer for TVF&R, served as the fire district’s liaison as Washington County Sheriff’s deputies evacuated residents in the Chehalem Mountain-Bald Peak fire. She praised law enforcement for their efforts, saying they did an “absolutely incredible” job.

So too did all the agencies that helped fight the fire, including the estimated 170 TVF&R firefighters who battled the fire at the height of the blaze.

“I think they did a stellar job because there was extreme fire behavior and weather conditions and low relative humidity over a large area with difficult terrain. Because of all the regional demand on resources with so many simultaneous events occurring, there weren’t as many ground resources available to any department,” said Ulven, who works out of the fire district’s Tigard headquarters. “The fact that no homes were lost is telling of how well the ground crews did and the way they used the limited resources they had.”

Meanwhile, Stamps said his takeaway from all the wildfires he’s fought over the years is that no one is immune to them, noting that “it doesn’t just happen in other places, it can happen here as well.” The other important lesson is to have a 72-hour emergency kit prepared.

At the same time, Stamps said he was especially pleased with all the off-duty firefighters who volunteered to come back on duty when the wildfires began raging.

“That’s what was impressive to me,” he said.