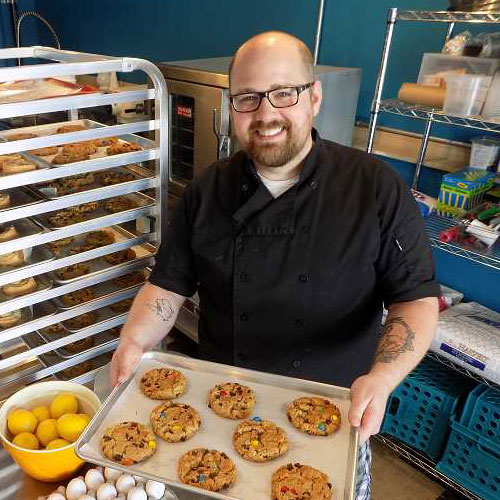 Why he is a community hero: Provides food pantry for those in need, holds fundraisers for sick children

He used it as a time to give back even more than he has in the past.

For the moment, Wilson has turned the front of his gourmet dessert business into a food pantry of sorts, offering boxes of pasta, soups, cereals, and produce to those who could use a hand up during these uncertain times.

“The community has been so generous, and people just bring donations and drop things off,” he said of the pantry he’s had to restock numerous times. “People have been really good.”

But the pandemic brought to the forefront the need to make sure students in need have something to eat as well, so Wilson has offered lunches to young people who pop by his business.

“I’ve talked to a lot of people who are struggling in town, and their kids do rely on school lunch,” said Wilson, a 2004 Sherwood High School graduate. “And these parents don’t have a ton of money, so we decided to put up a sign, and any kid comes into our shop — actually if anyone came into our shop and said they were hungry — we’ll make them lunch.”

Those bagged lunches often include a sandwich, fruit snacks, yogurt, little bags of vegetables, and a Hungry Hero cookie. Over the years, Wilson also has held fundraisers to benefit families affected by tragedies — everything from children with cancer to those involved in accidents. Several years ago, he hosted a fundraiser for a young Sherwood boy who died after being struck by a vehicle near his home. In two hours, Hungry Hero had raised $11,000 for the boy’s family.

During the most recent government shutdown, Hungry Hero raised more than $13,000 for local families struggling because they had members who had been furloughed.

“We did a cookie sale, and I auctioned myself off for dinners. So I went to people’s houses and cooked dinner for $500, so we ended up raising like $13,000 to $14,000,” he said, noting that he let them choose the menu items needed to create a really fancy dinner.

Wilson said he likes to help out because it makes him feel good especially at time where he doesn’t feel like he has control. While he admits he sometimes finds it hard to keep his mouth shut, he believes having a popular social media platform helps him show support for issues related to equality and rights for the LGBTQ+ community.

At the same time, as he’s helping others, Wilson has found personal rewards as well.

His business will soon move across the street to a new location that triples his current floor space, and he spent time while the pandemic shut down his business to create a new Hungry Hero menu item, a Basque cheesecake that he said has become “crazy popular.”

At the same time, Wilson, who will soon be working on a product line for Amy Roloff of “Little People, Big World” fame and is in the process of creating a new line of desserts and distributing his cookies, dessert bars and cheesecakes nationwide. His ultimate goal, he said, is to become successful enough to finance other people’s business dreams, noting that if something bad in his life happens, he tries to find a way to still spread love around, particularly in these divisive times.

“I’ve told people, and I preach this all the time: ‘Empathy is our greatest asset as humans,’ and there’s so much bad happening in the world that every time I have something (crappy) happen to me, I turn around and do something good for someone and I use that as therapy,” he said.