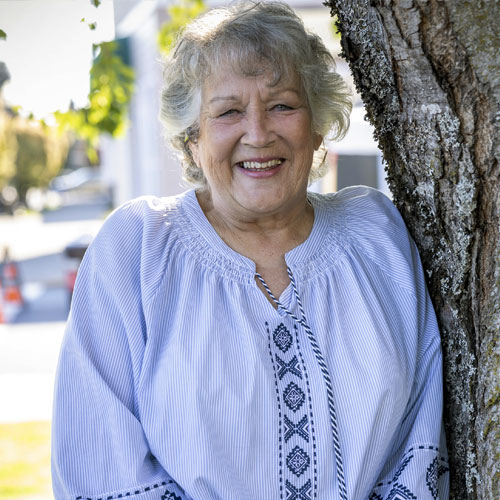 CREATING A REFUGE FOR VETERANS

With five brothers who served in the military during the Vietnam War era, Alta Lynch had a close look at the struggles veterans face when they return home and the struggles their families face while they’re deployed.
Lynch was one of the leaders in establishing the Elks Veterans Bunker in St. Helens in 2015.

“When we started this, it was just a place where veterans could go, where we could assist them and their families,” Lynch said.

Lynch was a truck driver and dispatcher for nearly four decades before retiring, freeing up more time to dedicate to the Bunker. But even before retiring, she had spent years working with veterans in the community, years when she often heard veterans say they wished there was a place where they could get together for camaraderie.

At the Bunker, in a house in St. Helens, veterans can get help finding financial, medical or mental health resources their service entitles them to, or just stop in for a cup of coffee and someone to talk to.

Lynch said that some veterans, particularly those from older generations, haven’t applied for all the benefits they deserve. But when a veteran goes from stretching their social security checks to cover the bills, to then also receiving compensation for injuries they suffered decades earlier, it can make a significant improvement in their quality of life.

Counties have Veteran Service Offices, but Columbia County only has one officer to serve more than 6,000 veterans in the county, according to census survey estimates.

Veteran Service Officers help veterans and their families apply for benefits through the Department of Veterans Affairs, but Bunker volunteers like Lynch build relationships that make veterans feel ready to ask for help, and then help veterans get their paperwork in order.

The current VSO for the county, Erin Nolan, only started a few months ago, but said she’s already seen that Lynch is a “go-to” person for local veterans. Nolan took over when Russ Clark retired after eight years as the VSO.
Clark, who has sat on the Bunker’s board since it started, said that his first impression of Lynch was that “she knew a lot of stuff, she was really passionate.”

“One of the things that’s best about Alta is she’s a go-getter,” Clark said, adding that Lynch knows everyone and uses that knowledge to find the right person to help with any need a veteran has.

The Bunker, sponsored by the St. Helens Elks Lodge, also draws on local resources that don’t come through the VA. Maybe an aging veteran needs a hospital bed for their home, or a pipe bursts while a servicemember is deployed and their family is already struggling to pay the bills.

Lynch can leverage the Bunker’s resources — including a local community of volunteers and donors ready to step up — to find veterans a bed, a plumber or whatever is needed.
State Sen. Betsy Johnson said that Lynch advocates “ferociously” for veterans.

“She’s fearless, she is articulate… her steadfast advocacy is just nothing short of remarkable,” Johnson said.
The Bunker also has: a small food pantry and collection of clothing and personal hygiene supplies for homeless veterans.

Lynch and other volunteers work with the National Alliance on Mental Illness, the county’s court program for veterans who struggle with substance abuse or mental illness and are facing criminal charges; a pet food bank that supplies veterans with pet food; Willamette National Cemetery; and other veteran groups such as the VFW and American Legion.

The Bunker hosts counselors from the VA so that veterans don’t have to drive all the way to Portland and sponsors Farming for Freedom, a program created by former local veteran Josh Sprecher before he moved away. Through Farming for Freedom, veterans grow fruits and vegetables on a communal lot, with the harvest going toward veterans and the local food bank, while others farm their own small plots in a community garden.

“It’s therapeutic. They’re growing something that’s in the dirt, they’re out and away from the hustle and bustle … (or) they can sit there under a shade tree and listen to the crick and just have that camaraderie,” Lynch said.

Often, veterans coming to the Bunker are just seeking connection, through a support group or a shoulder to lean on.
Recent weeks — following the withdrawal of U.S. forces from Afghanistan and the death of 13 American service members and dozens of Afghans in a Kabul airport terrorist attack — have been particularly difficult for veterans who served in Iraq and Afghanistan.

“We have a lot of frustrated veterans. This is a really tragic time in our country right now,” Lynch said. “It brings back a lot, opens up a lot of wounds.”

Lynch spent days in late August checking in with service members via text and even conducting a welfare check on a veteran who she hadn’t heard from in a few days.

“I just want all of our veterans and our military and our families to get everything that was promised to them,” Lynch said. “It’s such a small percentage of people who step forward to join the military that we owe them.
“What I can do to help that along the way, I’m going to. And that’s how every volunteer here feels, too.”