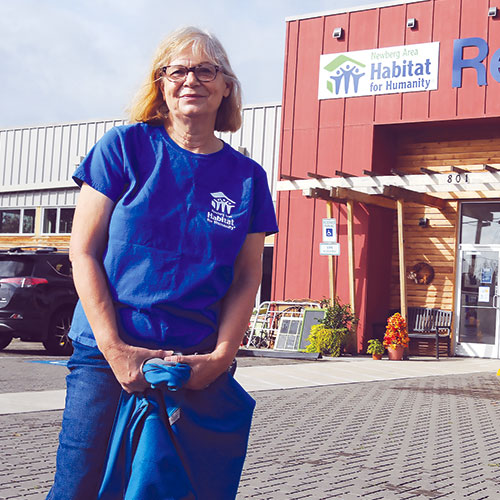 Why is she a Community Hero: Mildenberger volunteers for a variety of local nonprofit agencies and has done so for many years.

A LIFE OF DEDICATION TO COMMUNITY

The constant buzz of information available to us is exhausting and overwhelming. It is easy to look at the state of the world and get discouraged — corruption, natural disasters and violence dominate headlines. We often view problems as too big for ourselves and subscribe to the notion that one person cannot make a difference.

But real-world heroes do exist, and their stories are important. People who go above and beyond to serve others and better the world around them do so with unwavering devotion. There are people who believe in altruism, community and togetherness. Their stories are too often unsung and underappreciated.

Anne Marie Mildenberger has spent her entire life in Newberg. She graduated from Newberg High School in 1966 and stayed in town to raise a family. She has four children and four grandchildren, all of whom went to Newberg schools.

“Sometimes I walk downtown, I mean, this is home. I want this to be a place that my grandkids won’t want to leave,” she said.

Mildenberger’s passion for the community is palpable, and her dedication to volunteer work illustrates that. She joined the Jesuit Volunteer EnCorps Program in 2012 after encouragement from her son. It is a group of seniors that embraces the Jesuit philosophy of simple living, social and economic justice, spirituality and community.

“I looked into that and just fell in love with the people,” she said. “We commit to doing at least 10 hours of volunteering a week, working with the most marginal in our community.”

Her work with the Jesuits brought her to Newberg FISH, a nonprofit that provides food and essential supplies for people in need. Much of her time with FISH was spent working with low-income families living in Newberg’s impoverished areas.

“I started looking at the diverse income levels in our community, and it became a real eye-opener for me. It’s in front of you and tangible, you see it every day,” she said. She related a story about a family who came into FISH after hours looking for food. Mildenberger scrounged for anything ready to eat.

“There were some cupcakes, chocolate cupcakes, big frosting,” she said. “One of the little boys asked if he could have one, so we ate them. He looked at me and said, ‘These are happy cupcakes. The last cupcakes we had, my dad got mad and threw them at my mom.’ That is why I do what I do.”

Mildenberger worked with FISH for more than a year, quickly rising to the program director position, but pressing family matters forced her to step down for a brief time. In 2014, she contacted a friend who worked at Habitat for Humanity in search of work and began volunteering at its popular ReStore, which accepts donations of supplies, furniture, and houseware sold to fund local housing projects.

Her time with Habitat exposed her to the realities of local economic and social disparity.

“I think the biggest concern I have for Newberg is affordable housing. We have a homeless population in town. We forget that they’re people. They have a name,” she said. For Mildenberger, almost nothing is more fulfilling than the dedication of a new Habitat for Humanity home. Families work alongside the Christian agency to build a house for themselves and celebrate its completion.

“It’s just the simple part of having a simple home, and it’s dignity, a place to come home to and be proud of,’ she said.

Her dedication to the city of Newberg is unwavering. She wants to do more, find better solutions to community problems and ensure everybody is given a fair shot.

“You know, I am one of those frustrated do-gooders. We need to do more,” she said. “You look at a problem and it’s so overwhelming and you have no idea where to start, but you know you have to do something.”