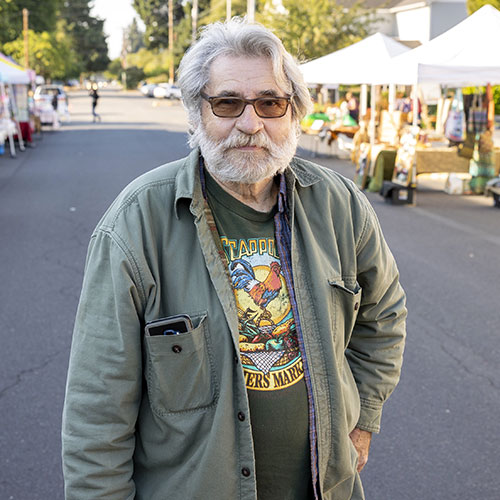 What makes him a community hero: Blank does whatever is asked of him to meet the goals of Habitat for Humanity and the Scappoose Farmers Market.

On Saturday mornings during the warmer months, Blank is down on East Second Street in Scappoose, running the Scappoose Farmers Market.

Back in 2013, Blank was a board member for Columbia County Habitat for Humanity, part of a group of volunteers who were hoping to revitalize the mostly dormant nonprofit. Part of that initiative involved opening up a local ReStore, which sells used furniture and home improvement supplies to generate revenue for the nonprofit. In order to get approval from Habitat for Humanity International to open a store, the local organization needed to hire an executive director.

Blank was hired as a part-time executive director, allowing the organization to open up the ReStore in Scappoose.

“A few months after that, I felt comfortable enough to say, ‘Hey, let’s seek someone who could be there full-time,” Blank said, a move that resulted in the board hiring Jennifer Anderson, who had founded the organization more than a decade before.

Rather than calling his work complete after periods as a volunteer, board member and executive director, Blank stuck with Habitat, serving in a number of different roles over the years.

“I wear several hats. So while I have one title, maybe I switch over and do other things that need to be done,” Blank said.

Dave Marble, the ReStore manager, said that over eight years working together, Blank has been willing to do whatever is asked of him.

“His faithfulness and loyalty have been foundational to the organization,” Marble said.

Anderson described Blank as “a generous, kind-hearted spirit, always working for the community and looking for different ways to help out.”

For more than a decade before starting his work with Habitat for Humanity, Blank ran the Scappoose Farmers Market.

Blank and a few other people got the farmers market going as a way to inspire activity in that part of Scappoose.

“Highway 30 has been one of the biggest issues for businesses, because people just drive through. We were trying to pull them off the road and show that there were other activities,” Blank said.

He’s kept the market going for 20 years now, but admits that wasn’t always the plan.

“I thought I would get it up and running and somebody else could take it over,” Blank said, calling it “my first love of volunteer work.”

When he started the market, he was still employed at Boise Cascade.

“Then it kind of evolved where I got involved with other things in the community,” he said, noting stints with the city’s planning commission, Cycle Columbia County, other Scappoose Community Club programs (it sponsors the farmers market), and other groups.

State Sen. Betsy Johnson, who said she goes through tomato withdrawals when the farmers market ends each fall, describes the market as “a real gift to Scappoose.”

Johnson said she thinks people underestimate the amount of work that goes into coordinating the farmers market, from finding vendors and keeping them happy to complying with all city requirements.

“Bill has done that masterfully,” she said.

Blank got involved with the Oregon Farmers Market Association, even serving as the group’s board president. Through his duties running the market, Blank has met market managers for farmers markets in other communities.

“I just like to stay in touch, so I just kind of kept my foot in,” Blank said.

The people who come to the farmers market — including the volunteers, customers and vendors — are the main draw for Blank. Though the sales draw the vendors, Blank said that’s “not always the most important thing to some people. Some people just want to be there to meet other people because it’s a community.”

The market is like “the front porch of a community,” Blank said. “There’s just something special about it.”

Beneath it all, his utter belief in volunteerism underpins most of Blank’s choices.

“I just recommend people strongly consider serving on a board,” Blank said. “There’s a lot of needs out there. (Volunteers) are a vital part of a community and make the community work.”

The list of groups Blank has been involved with is a mile long, but few have lasted as long as the farmers market.

“You find yourself involved with things, but you can’t always keep up with them if you’ve got other things going on,” Blank said. “I think giving a little of your time, whatever it is that you can give, for even a period of time, you’re doing something to help.”

But long-running involvement with an organization brings even more benefits.

When families move into a home built by Habitat for Humanity, the newfound stability is particularly impactful for the children, allowing them to stay in one neighborhood and school, rather than moving from apartment to apartment, Blank said.

The children who moved into the first local Habitat for Humanity homes have since grown up. “We’re seeing them as adults now, doing really well in their own businesses, helping out others. So those are the things that you don’t see (right away),” he said. “You see them after years of being around. … I can’t think of anything more rewarding than to watch that.”