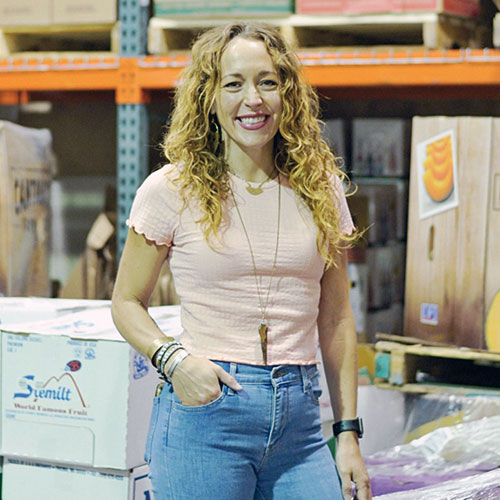 Why she is a community hero: She works to ensure that families in need are still being fed through the food bank during the coronavirus pandemic

FOOD BANK AND SMALL BUSINESSES HELP EACH OTHER

With nearly two years under her belt as Columbia Pacific Food Bank’s director of business development, Meagan Fawcett has strengthened the regional food bank’s relationship with other Columbia County businesses and nonprofits.

Fawcett said that family members have referred to her as a “professional food pusher” for years, so when she heard about the food bank’s position, it was a perfect fit.

When the pandemic hit, many food banks and other social service providers expected to see demand increase and funds decrease. That proved only half-true for Columbia Pacific Food Bank.

Before the pandemic, the food bank distributed an average of 12 tons of food each week, or 24,000 pounds. When businesses shut down, the weekly demand grew to 19 tons per week.

Now, they’re averaging 16.5 tons per week. But with Fawcett taking the usual fundraising events online, the donations have kept coming. “Every other month since COVID hit, I have come up with a new event to replace an event that we normally would have had,” Fawcett said. The food bank hosted its annual Hunger Run in early March, just days before schools, and then restaurants, closed down to slow the spread of COVID-19.

Other fundraisers, like Empty Bowls, went online. In past years, the Empty Bowls fundraiser has allowed attendees to purchase a bowl filled with soup, with funds benefiting the food bank. This year, Fawcett enlisted a local ceramicist Pat Brame, photographer Lacey Tolles, graphic designer Dan Rocha, and Doug Boyes of Wild Currant Catering to craft hundreds of bowls, photograph them and list them for sale online with Wild Currant’s split pea soup recipe and a bag of split peas.

Fawcett “is a go-getter and very much about collaboration,” said Natasha Parvey, a CPFB board member. Parvey added that Fawcett “takes time to build relationships across all levels of business.”

Many of the food bank’s fundraising projects have also served to promote small local businesses. The food bank’s “Give a Truck Food Tour” on Sept. 24 let attendees purchase a tour plate for $10 with samples from local food trucks.

The food bank delivers food to 38 locations in Columbia County, including food pantries, meal programs, and produce distribution points. As of 2019, the food bank received most of its food from the Oregon Food Bank and the USDA, but 22% came from local donors.

In less than a year, the food bank has already raised half of its capital campaign’s $300,000 goal. Last year, the state’s economic development agency awarded a $1.5 million grant to purchase the former Feed and Seed building in St. Helens for the food bank. But before moving over from the current food bank facility at 474 Milton Way, the food bank is raising funds to renovate the building’s interior.

“I’m also a pretty social person, and I felt like it was going to take a tribe to raise my children, so I wanted that kind of close-knit feeling,” Fawcett said.

Casey Wheeler, the food bank’s executive director since 2013, said that as the food bank’s first full-time development director, Fawcett has increased fundraising. Without Fawcett’s energy and creativity, fundraising “would have basically ground to a halt” for a few months after COVID hit.

Fawcett initially commuted outside the county but said she started to understand the importance of local businesses once she started a job closer to home.

The food bank’s relationships with local businesses and nonprofits were formed long before COVID, but the pandemic provided new opportunities to put those relationships to use and develop new partnerships. Fawcett said that Columbia Community Mental Health worked with the food bank to deliver food boxes to some of CCMH’s clients when lockdowns began.

Major food distributors who typically supply restaurants were abruptly left with trucks and warehouses full of perishable foods when restaurants closed down and were frantically calling food banks to distribute the excess food.

Fawcett also helps spread the word about how to become a food bank client, using frequent posts on the food bank’s social media page to showcase fundraising events, explain how to receive an emergency food box, feature volunteers, and share photos of the fresh produce ready to be picked up by clients.