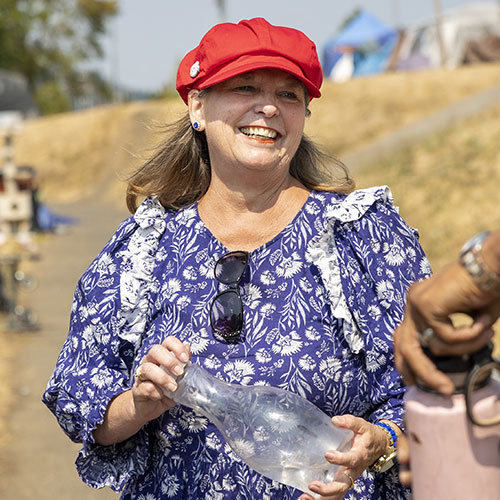 Why she's a Community Hero: Rose dedicates her time to helping the homeless.

Victoria Rose used to be a regular Portlander who worked on her dog training business and rode her bike along the Springwater Corridor Trail. Back then, Rose felt so uncomfortable with the homeless campers along the path that she stopped going, and she even resented them for “trashing up the city.”

Now, Rose dedicates her time to helping them.

In the middle of 2020, Rose said she had a realization that homeless people were just that: people. Just like everyone else, they are doing the best they can.

She started small, bringing soup or bread out to a camp or dropping off something she was going to throw away anyway.

Rose has since halted her own work for the cause, and she’s been living off savings since May 2021. “This has overtaken my life,” she said. “I’m doing this morning, noon and night. And I dream about it at night.”

Rose organized a group on the social network service Nextdoor. There she finds members for Homeless Helpers PDX, and she collects donations from others that her group can share with people living at homeless camps. The group converses via email and Rose’s email list, only using Nextdoor to find helpers and donations locally. She has 30 active members who cook, collect donations and help her bring stuff to those who need it.

The work is full-time for Rose, and she’s come far from just bringing people soup and extra supplies every once in a while. First, she started filling up her dining room with donations. Now, a donor pays for the group to have a storage unit; they’re even upgrading from a 5-by-5-foot unit to 5-by-10.

The more serious work started after Rose had a more personal experience in December 2020. The experience helped her finally “wake up,” as she says. As she got home one day, Rose saw her neighbor Betty climbing out of a dumpster. Betty had dropped her keys in, and Rose had the idea to ask someone for help at a nearby camp.

She did, and a man responded immediately to the $20 offer for help. After he found the keys, Rose invited him in for some hot coffee and a shower. Rose was weary of the stranger and still a bit weary of the homeless, she said, so she tucked her handgun into her waistband and waited for him to finish his shower.

The two grabbed more things for the man that they had around their homes. Rose went to drop him off and asked what else he needed. The next day, Rose came back with his requested sleeping bag, but he was gone. She gave it to someone else, took more requests for items and kept finding what they needed — for free — on Nextdoor. Thus, Homeless Helpers PDX began.

The group has taken various supplies to the camps, including items like ice chests or rubber bands that people wouldn’t think a homeless person would need. “What haven’t we taken?” she said. “They need everything. When you have nothing, everything is something.”

The group can’t change someone’s entire life, but if they can keep someone from freezing or going hungry — that’s a lot, Rose said. It’s not a party out there, she said, and lots of people are at their lowest points when they’re homeless.

“We can’t say ‘easing the misery.’ We can’t say that because we can’t — we can’t ease all their misery,” she said. “But we can ease some of it.”

It’s hard for Rose when she hears people looking down on people who are homeless, she said. They’re people, and they’re our neighbors, too, she said.

“My opinion is: We’re all a bad decision away from being homeless — or an illness or injury. It could happen to anybody,” Rose said.

“Every single person out there is somebody’s mother, father, brother, sister or child. Everybody. We need to wake up. This is an emergency.”

The average person will run out into a busy highway to rescue a strange dog that might even bite them, Rose said, but that same person won’t make eye contact with someone on the street and just say hello.

“Would you be comfortable setting up a tent on the side of the road and sleeping in it tonight?” Rose said. She added: What about if people yelled at you, sped in loud cars past your camp or spit on you?

“People want to help, but even with 30 people I don’t have enough help,” Rose said.

Rose is continuously looking for more helpers for her group, but she also hopes her work will empower others to do it themselves.

“A bigger goal is to get every Tom, Dick and Harry in these houses and apartments to start seeing these people as their neighbors and sharing with them directly,” she said. “Just as I did in the very beginning.”

For more information about Homeless Helpers PDX, visit: nextdoor.com/g/4023uxilc. The group has also organized a and to raise money for expenses.